Showing posts from March, 2019
Show all

Adding to my garden 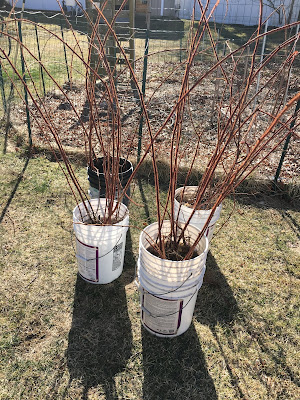 I came across a free ad a few weeks ago for raspberry canes. The man had bought the vacant lot next to his house and it was covered in trees, weeds and lots of raspberry canes. I was lucky to see the ad about a half hour after he posted. I emailed him right away and he said there were boxes at his curb. Come and take whatever I wanted. It was about 8:30 at night but Hubby and I didn't want to miss out on free raspberries so we went then. When we arrived, there were several large boxes, garbage cans and tubs. The man had asked that we leave the cans behind but we could take the boxes. So we took 2 boxes. When we got home we left them in the bed of Hubby's truck covered. In the morning we got to work.  I started moving all of the canes into buckets of water. I carefully separated them to see how many we had. We got over 40. While I was doing that, Hubby and my son started to dig a trench to put them in. They also put in two shelf posts that we had to put at the ends of t
8 comments
Read more 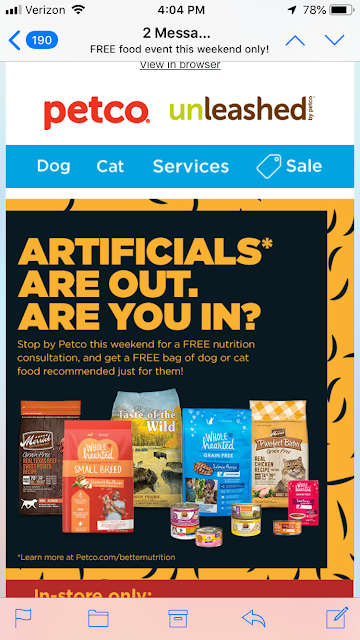 Petco sent me this email yesterday. I love free so I went on the way to bring YD to work. She is always up for a trip to Petco. She loves to play with the kittens. It took about 5 minutes and the gentlemen went over food choices for Oreo and Lip.  We settled on the senior dog food for Oreo and the salmon for Lip. They were originally $22.99 each. They were both on sale for $3 off this week but I got them free. The coupons were by the register and the gentleman that went over everything with me gave them to me.  I love the puppies but 4 pounds of dog food for $23 is way out of my price range. Glad I got it for free. Hurry, it is today and tomorrow only. You need a Petco card to get it but you can sign up in store if you don't. It is for cats too. Let me know if you get it.
Post a Comment
Read more 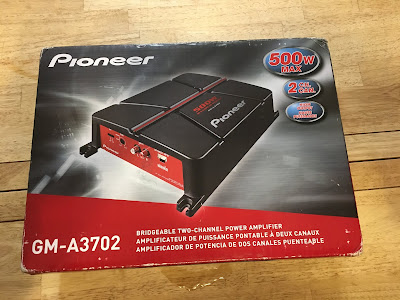 Hubby had to buy some new equipment from Best Buy for work. He used my rewards card(work doesn't have one) and we earned $60 in rewards dollars. Hubby has been wanting an amp for his truck so he used some of the rewards. He had them ship it to the store so that was free too. He is hoping to install it this weekend.  He also brought home leftovers from work. I made bread pudding from the bread. It was stale. My son and I enjoyed the pizza several days for lunch. Hubby got a free lunch and a free dinner at work due to meetings. He also earned a very generous dinner voucher for 2. He has been working some late nights and  weekends doing upgrades. His boss was really thankful. We are going out this weekend. Can't wait.  Did you get the free  candles  I told you about. We did.  We each got a coupon for a free candle with any purchase.  So we went back this week and got them. They are great for gifts.  We did get 4 but my son took one upstairs in his
6 comments
Read more

In a few short months... 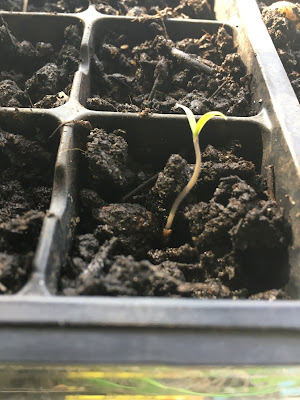 Look at what I found this morning. This little guy popped through. It is my first tomato plant of the 2019 season. Many more to come. I love this time of year when the seeds all start to germinate and I get lots of baby plants. I dream about all of the wonderful things to come.  The first few tomatoes are always the most amazing. All winter we have been eating boring store bought tomatoes. They don't taste the same as the ones I grow.  Then there will be a basket full. I will start incorporating them into all of our meals.   Tomato slices on sandwiches Chicken Bruschetta pizza. Then they will explode. Piles and piles of tomatoes in just a few short months.  So many that I will probably be a little overwhelmed. They tend to pile up and fill my drawers in the fridge. Then they fill up bowls all over the table and counters.  When I get a day, it is time to make sauce. A very important staple in my house.  The amazing sme
10 comments
Read more

March 27, 2019
My grocery budget is about $400 a month. Last year I averaged $432.54 a month. I have been struggling to stay within my budget. Hubby and I talked about it and have decided to up the budget to $500. We will give it 3 months to see if that works better. It means a $100 less into savings every month.  My youngest daughter has had stomach issues for years. Last year she went on a gluten free diet. I had heard it was more expensive but I never realized how much. She has been able to eat foods that she wasn't able to enjoy in years. She is doing so much better so an extra $100 a month is worth that to us. Hubby also has a dairy allergy. His items cost extra also but we are used to them.  As anyone that reads my blog knows, I shop sales, use coupons, have a well stocked pantry, cook at home and use Ibotta. Certain areas of my stockpile were dwindling. We don't want that. So we are making the $500 a month budget retroactive for the year. That gives me some extra money for stocking
7 comments
Read more

March 26, 2019
My car started making a really loud obnoxious noise last week. I told Hubby about it. He took my car for a drive. I drive a 2006 Toyota Sienna. We got it used in 2008 I think. It was a great car for 3 kids and I watched my niece at the time. My car has been hit several times. Never anything major thankfully. She is beat up but she keeps on going. Hubby stays on top of the maintenance. So back to the noise. Hubby thought it was the muffler. Before work yesterday, Hubby and I dropped my car at the mechanic. He is close by and we use him often. We have 4 older vehicles. They do good work and are very honest. Later in the day I got the call that the car was ready. My son was home so he drove me over to pick it up. When I went to pay, they handed me the keys. I told them I didn't pay yet. He said "No Charge". I was missing a screw and something needed to be tightened. He did it for free. I couldn't believe it. All day I was bugging Hubby about how much a new muffler was. M
8 comments
Read more 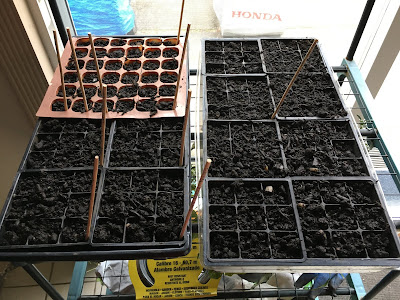 I ended up hurting my shoulder this week. Of course it was my right one and I am right handed. That made it so I barely slept and my neck was hurting too. I went to the chiropractor and he did some adjustments and told me to take it easy for a few days. I guess he doesn't know it is time to plant my seeds. Thankfully my son was able to go to Home Depot with me to get 2 bags of top soil. Hubby was nice  enough to get me my seed trays down from the loft in the shed. I did get 2 trays of seeds planted. I did 3 kinds of tomatoes, 4 kinds of peppers, eggplant, and celery started. I still have a bunch more to do and I need to get into the garden and plant peas. But if I do too much my shoulder will get worse and I don't want that. I have done this before so I know I have to take care of it.  YD needed more GF muffins. I made banana chocolate chip.  Hubby came home for lunch while they were cooking and wanted to have one. He can't because they have dairy in them.
6 comments
Read more 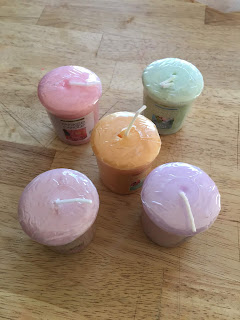 Yankee Candle has a rare coupon out. It is good March 23 and 24. $10 off $10 purchase. This coupon only happens once a year. 1 per person. Hubby, the kids and I will be running to get these. We love their candles and air fresheners. If you have one near by, go check it out. Let me know what you get. https://www.yankeecandle.com/statics/images/email/032119_R/coupon.html? These votive candles are $2 each. They were free after the coupon. Got lots of different scents. Hubby and YD got them too. My son is going to go after work. Did you get any?
4 comments
Read more 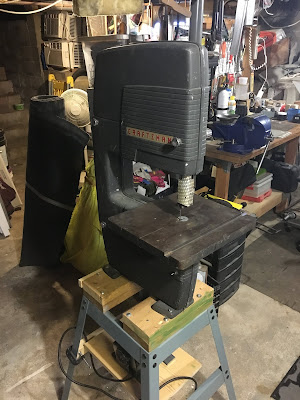 We have been cleaning our basement out the past few months. It is an unfinished cellar and part crawl space. We do not have a garage. Hubby wanted it cleaned out so he could have more room for projects. He made a list of items/tools he would like to get over the next few years. I love looking at Craigslist and Nextdoor at their free sections. A man posted an old band saw. He had taken it apart to replace a part and he never got it working again. I quickly called Hubby to see if he wanted it. He did. We picked it up after work that night and my son helped him get it in the basement when he got off of work. Hubby had it up and running perfectly in a few hours. It is very helpful to have a handy hubby and YouTube. 1 item off the list for free.  My son keeps us well supplied with bread . We used the bread for pizza, egg salad and chicken salad sandwiches, french toast casserole and sausage and peppers. We gave several loaves away and several are still in the freezer.  He a
9 comments
Read more
More posts